Conquering the Pull Up

Something monumental has happened. Something that I have never been able to do my entire life and always wrote off as something impossible. I DID A PULL UP! I have very clear memories of the Presidential Fitness Test in elementary school – the entire class would watch as one person went up to monkey bars on the playground, held their chin above the bar and stepped off the landing to see how long they could keep their chin above the bar. In my classes of 30, only 1 or 2 people could ever hover for a millisecond or more. There was always one boy who was able to hold himself for at least a minute before falling. 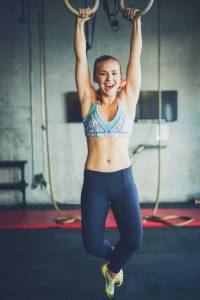 I dreaded going up there. It was the epitome of public failure, even if I was in good company. So when I started training with Jared Cohen, I told him one of the movements I wanted to conquer was the pull up. I figured it would take a few months to build the strength and coordination to make it happen, but it was much quicker! Even though Jared is a miracle worker, the combination of all the mobility and strength training I had completed before was refined by Jared’s coaching techniques. It was like all the puzzle pieces finally fell into place and magic happened!

When you break it down, the pull up is not a very complicated movement. Being able to lift your body weight 1ft up off the ground is not a feat of super human strength by any means, and yet so few of us can do it. I set it as a goal because its been something I’ve never been able to do and to me, it demonstrates one of the pillars of shoulder strength. In elementary school, the Fitness test consisted of a number of tasks, including a 1 mile run and sit ups, all spread out over a number of days, but there is nothing like the public humiliation of failing at a chin up, at least for me. I’m not a pull up ninja yet – there’s still strength to be built to increase the number of times I can complete it. So far, I’m at 2 a week, which is still pretty AWESOME, if you ask me 😉

Nutritious movement and trying to move your body in as many ways as possible throughout your week may lead you to discover new strength you never knew possible! Off to roll my sore latissimus and shoulders now 😉