Diaphragm Strength and Back Pain

Your respiratory diaphragm does more than help you breathe. I’ve waxed poetic about the magic of the diaphragm, its role in down regulation and how so many of us are not breathing optimally. On one hand, it’s awesome that you don’t have to consciously control each breath every day, as that would quickly become exhausting. But on the other hand, if the diaphragm governs more than just breathing, are we overlooking a critical part of the pain/injury puzzle? 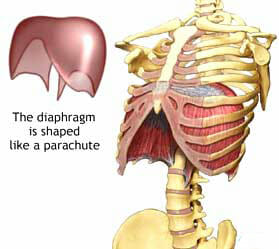 A 2013 study from Respiratory physiology & neurobiology journal found that diaphragm fatigability (exhaustion) was greater in those who suffered from recurrent low back pain (LBP) than those who didn’t. Before I get in to how they came to this conclusion, I also want to mention how gnarly human research is. To be sure they were collecting legit data on diaphragm strength and pressure, the participants were fitted with balloon catheters through their nose to measure gastric and esophageal pressures. Then they had to inhale against resistance. They did a few tests ahead of time to make sure all involved were comfortable with the procedure and protocol, but thank goodness these people were willing to have balloons stuck up their nose in the name of science!

Onward… what the researchers found was that the study participants who suffered from 3 occurrences of non-specific LBP (not related to recognizable pathology) in the prior 6 months had a greater fatigability of their diaphragm than those who did not. Those who did not have back pain were able to sustain the workload for the test.

While further studies are needed because this does not automatically mean that diaphragm resilience and back pain are connected and the study group was only 25 people, it starts to raise some interesting questions.

While I don’t have all the answers yet, I do know from my own personal experience and what I witness with my clients is that learning to breathe better makes connections and corrections in areas seemingly unrelated. In fact, according to a 2003 study on Pain and faulty breathing in the Journal of bodywork and movement therapies, 75% of study participants had faulty breathing. 75%!!!!

So if back pain is so prevalent and crappy breathing mechanics are just as equally common, why don’t we flip the script from prescriptions and learn the basic human right of breathing. The body is an interconnected system. To think that breathing, spinal stability and your health are not connected is naïve.

Special shout out to Corey Wright, a Yoga Tune Up® Teacher in Illinois for sharing the research study that sparked my curiosity!