I hate doing things by rote. It was such a relief when I found Yoga Tune Up and was encouraged to constantly look for novel ways to challenge and move our bodies. The same goes for my personal practice. While I do regular strength training and stretching, I probably could stretch and roll for much longer than lifting, even though I honestly enjoy both. 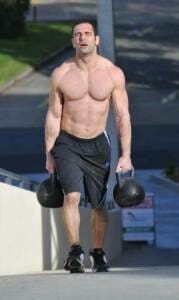 I’ve been recently working with fellow YTU teacher, CrossFit Coach and my new podcast partner, Jared Cohen on my personal workouts. (Be on the lookout for our new podcast, launching early 2016 called BEHIND THE PODIUM: Problem Solvers have problems too… Tune in to listen to Jared, me and guests expand on this topic that begins to open a dialogue about best practices, philosophies, and struggles of the coach, teacher, and health-care practitioner) The best part is that I have somebody else telling me what to do, which opens up opportunities for skills and movements I never would have thought of on my own.For example, my workout today was basic – all I had to do was stand there and hold a 16kg kettlebell in each hand, also known as an isometric farmer’s carry stand.

Now, let’s be honest, standing in place holding a heavy object is not hard. But it was hard because I don’t normally hold things that are that heavy. In fact, I got so tired of carrying my class set of therapy balls to and from class that I put them in a rolling suitcase so that I wouldn’t have to pick them up. I don’t often buy super heavy groceries and if I do, I take multiple trips in to the house (or ask my husband to help) to avoid having to carry heavy things. I know I’m not alone in my avoidance. While we shy away from heavy lifting, the objects we do commonly lift (cellphones, tablets, computers etc) are getting lighter and lighter.

Back to the workout, which consisted of standing there with the 16 kg (which is about 35 lbs.) for a minute. Yep, just a minute. But the minute gave me a TON of information about what I was lacking in my shoulders. I could feel the scarcity of strength in my shoulder capsule and it wasn’t only the muscles that were fatiguing, but the shoulder capsule itself, with its the associated ligaments and tendons were struggling to bear the load of the kettlebells in my hands. Now, this is not to say that lifting heavy is bad and you should avoid it – in that moment, it was quite obvious that more of that was clearly needed! 35 lbs, in the grand scheme of things, is not really that heavy. Other things that weigh about 35 lbs:

I thought hanging was enough, and while it is also important to load the entire weight of your body through your shoulders, it puts the shoulder in a different joint orientation than if you were holding heavy things in your hands. (I don’t recommend you jump right into hanging, by the way. There are many ways to progressively build your strength for that)

This week in my classes we were talking about most, if not all, of our daily activities are in front of us, and how 100 years ago that was the still the case. It’s not like human eyeballs have gradually shifted to the front of the skull in the last century. Most people likely had to carry heavy things because technology hadn’t yet developed ways to make tools and objects lighter and vehicles and apps to deliver things to you. Even 200 years ago you may have had to carry water from the market or seeds across your family’s field. You were doing things like this that were heavy all the time and it was nothing new – you probably started when you were old enough to pick the items up.

The workout was a perfect reminder to me of the importance of variation. The combination of your weekly movements should be a rainbow of colors that are fast and slow, choppy and smooth, heavy and light, strong and flexible. Just do it all. Your body responds to stimulus just like your brain and think of how boring the same monotony is for your brain! It’s the same for your tissues. While you may not have kettlebells hanging around the house, there are probably objects around that are heavy like water jugs, vacuum cleaners etc. just waiting to be moved.

Find something heavy, pick it up, and hold it down by your side for one minute. Since we’re no longer farmers (unless you are a farmer and thinking that the city folks have too much to complain about) make up for your strength deficits with your environment!