How to Build the Ultimate Standing Desk

With the rise of sedentarism in our culture, many desk heights are also seeing a rise. It’s been said that “sitting is the new smoking” and while standing at your workstation isn’t a cure-all, it can help you to log more movement throughout your day. Sitting in itself isn’t bad for you, it’s the fact most of us log 8-14 hours of sitting every day. 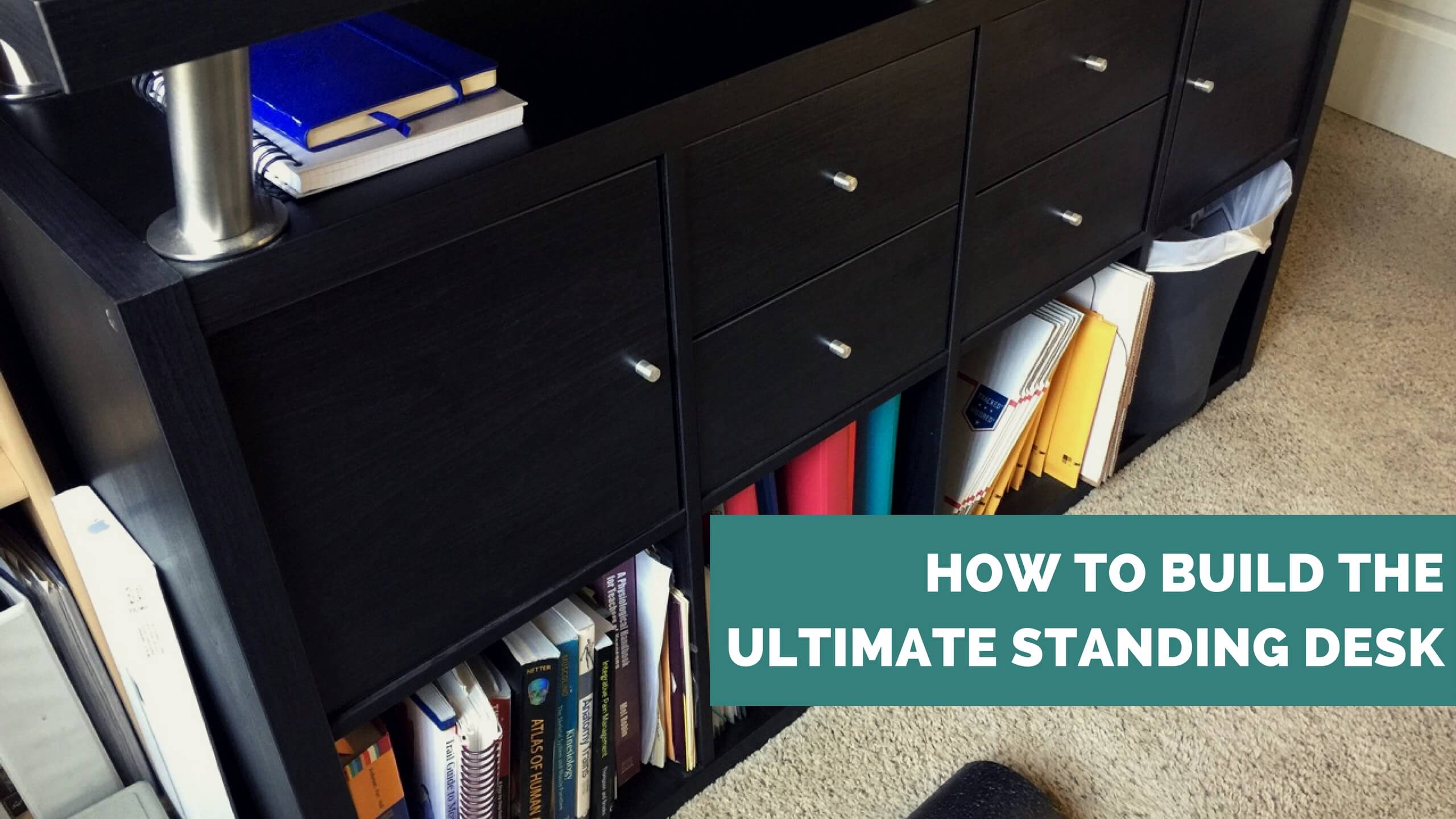 While at rest (which you are when seated), your body slows many metabolic and biological processes down, since you aren’t using them. Standing also allows you to fidget, which I have found to be incredibly helpful in maintaining my focus. While we’re told all throughout school that we “need to sit still!” I am excited that the tide is shifting and we’re being told to move more.

Standing desks are nothing new – during the 18th and 19th centuries, they were popular in the homes and offices of the rich. It’s believed that da Vinci, Benjamin Franklin, Thomas Jefferson, Winston Churchill, Virginia Woolf and Ernest Hemingway were all standing desk users.

After working for a few years on a small portable standing desk, it was time for an upgrade. I wanted a standing workstation that allowed for storage beneath and a full desktop, which I did not have before. I found the instructions for this desk from Jeff Schertz’s blog and then updated the parts with what is currently available at IKEA.

While the height of my new desk is fixed, you can make changes by putting additional legs underneath the cabinets or using alternate brackets for the monitor stand. At 5 feet tall, I find this set up on carpet to be absolutely perfect! 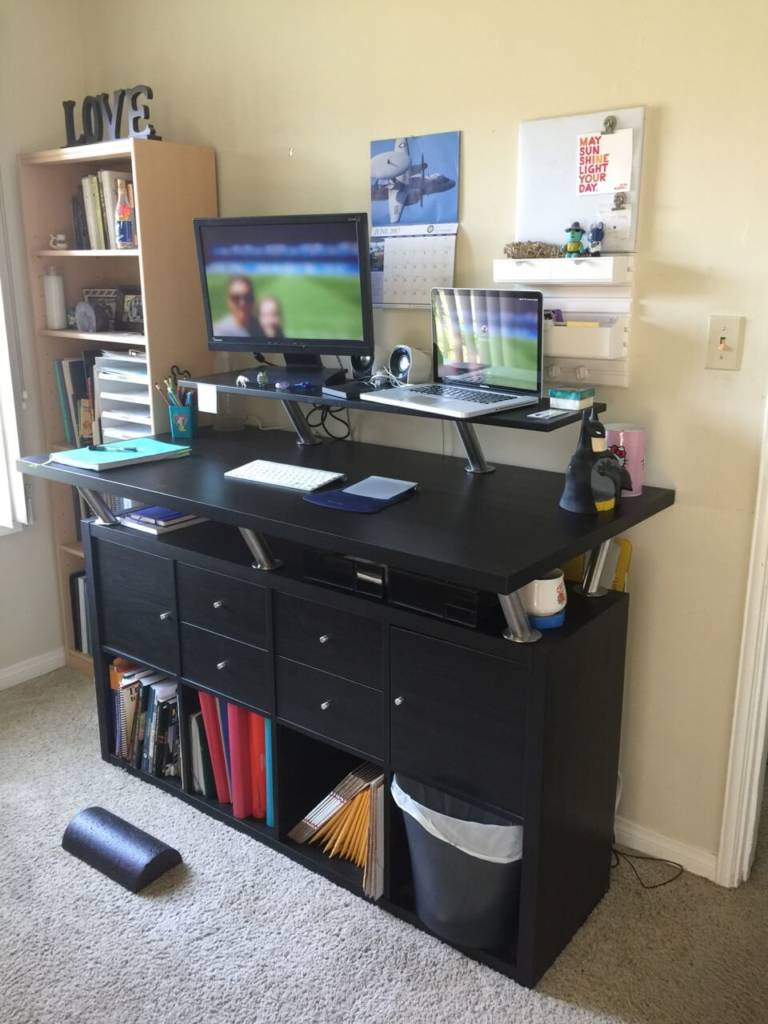 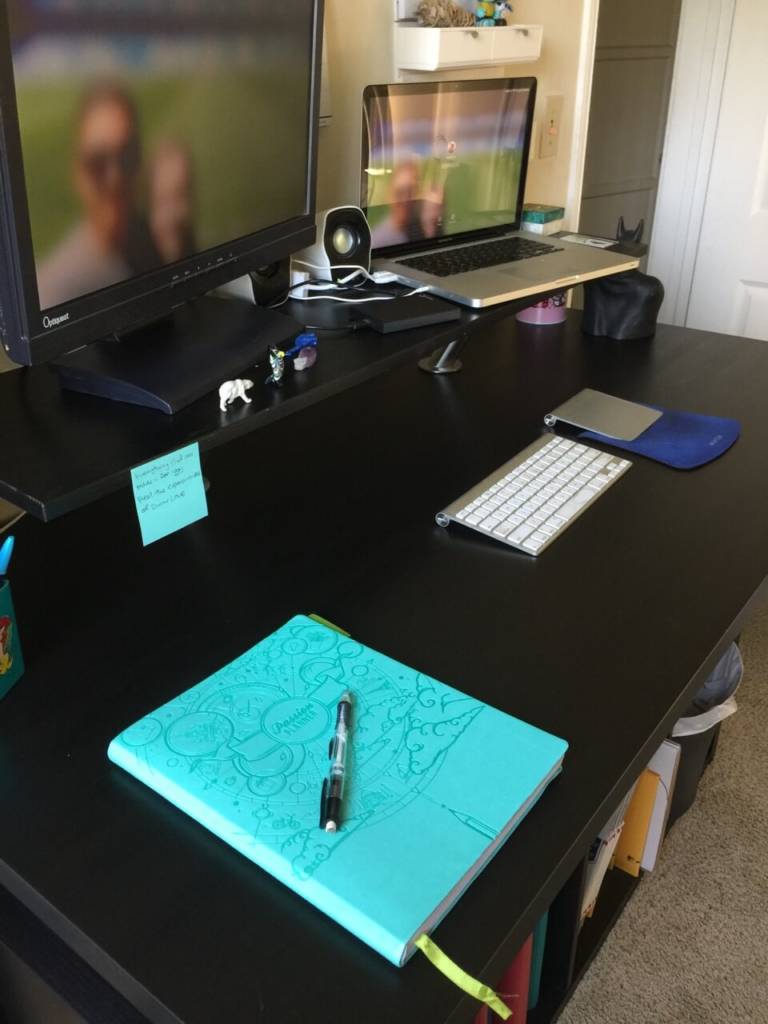 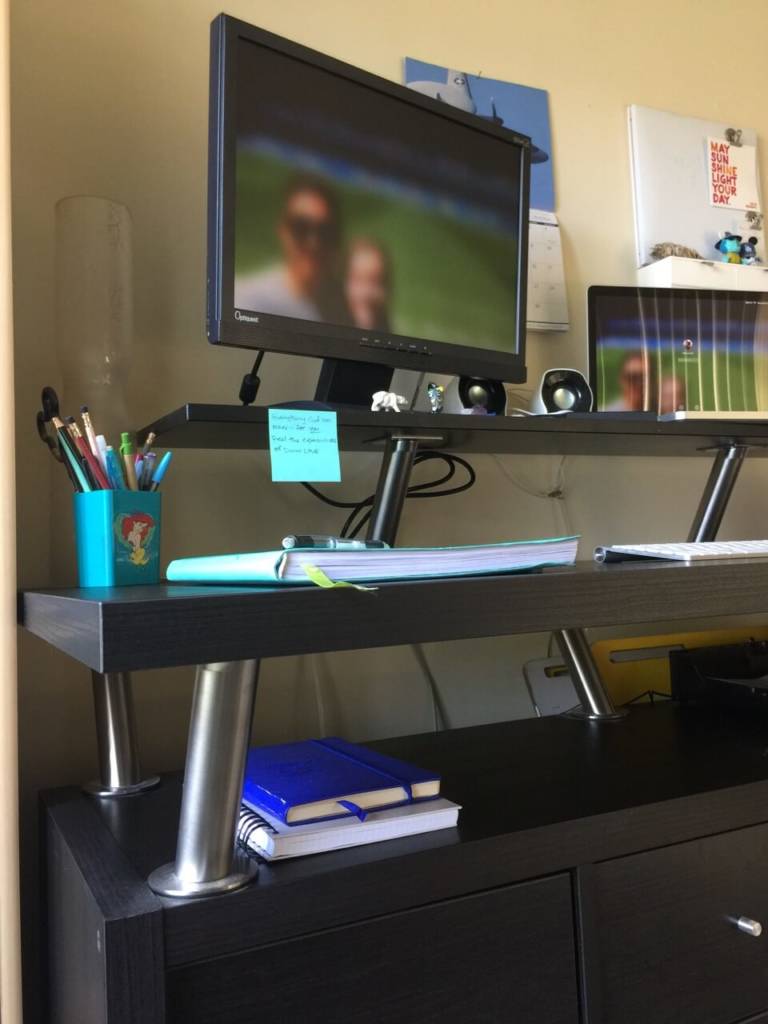 I now have standing height work and writing space, which is a great improvement over my previous set up. The addition of a lot of storage has helped to keep clutter off the desk as well. The only downside is I chose to go with all black, not thinking about cat paw prints and fur! But oh well, it makes me keep my desk a lot cleaner than I would otherwise.

Still not convinced standing could be good for you? Researchers at the University of Chester looked at 10 people who were asked to stand for at least three hours a day for a week and found they were burning an additional 50 calories an hour. While that might not seem like a lot, that can add up to about 30,000 extra calories burned over the course of the year. It’s a super simple way to introduce more movement into your daily activities!

Now, should you go full out and start standing for 8 hours a day? NO. Take it slow and work yourself up to it, just as you would any new physical task. Start standing for 5 minutes every hour, and then being to increase that by 5 minutes every other day as it starts to get easy. If you feel overly fatigued, stay where you are until you can stand for longer periods of time.

I still am not standing for 8 hour days as my work day is in 2-3 hour blocks here and there. But for all those times standing in line at the grocery store are much easier now as I am “trained” with the strength and endurance to do so.